There was a lot riding on this year’s Black Friday results. So far, 2019 has seen more store closings than any previous year as consumers continued to shift their spending habits from in-store to online. A successful holiday season is imperative for retailers; not only does it make or break the current year, but it also sets them up for success in the coming year. With so much at stake, retailers were nervous going into the first holiday weekend – some even started dropping prices before the Thanksgiving turkey was stuffed in hopes of capturing early holiday sales.

It turns out, Americans are still in the shopping spirit. Adobe Analytics is estimating that sales for the entire weekend (Thanksgiving to Cyber Monday) will top $29 billion, or 20% of total revenue for the full holiday season, up from 19% last year. But, the holidays are really only just beginning. Here are the top lessons we learned from the first weekend of the 2019 holiday shopping season:

A record 189.6 million US consumers shopped online and in-store between Thanksgiving and Cyber Monday this year, up 14% compared to the same weekend in 2018. They also spent an average of 16% more this year, with the average shopper spending $361.90. While spending has been increasing steadily YoY, this year’s increase could be partially due to the fact that this year’s holiday season is six days shorter than previous years. Regardless, the increase in spending is a positive sign for retailers this year. 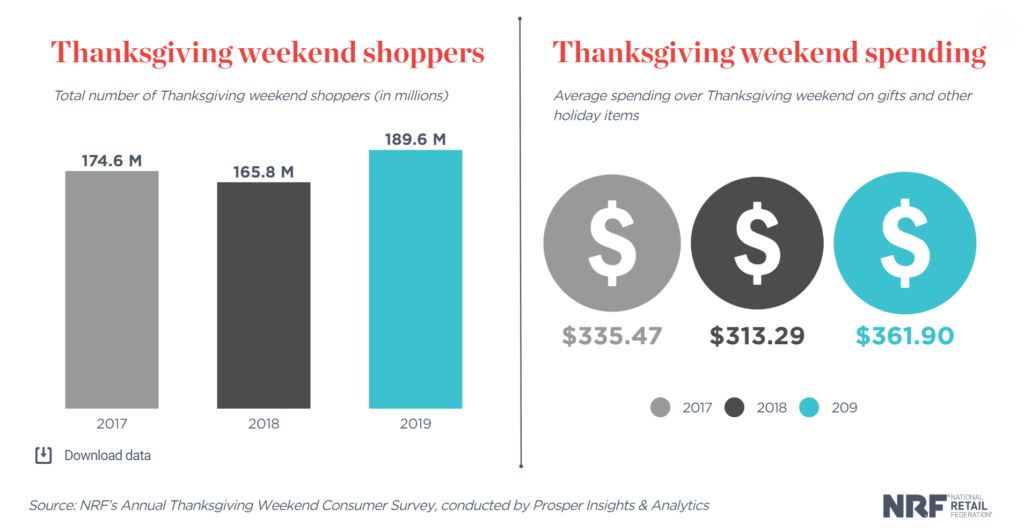 Black Friday Is No Longer All About Brick and Mortar

While Black Friday is still one of the biggest shopping holidays of the year, the days of camping outside of stores at in the early Black Friday hours may be over. Shopping in brick-and-mortar stores on Black Friday dropped 6.2% compared to 2018, according to data from ShopperTrak. Even though consumers aren’t flocking to stores on Black Friday, they’re still taking advantage of all the holiday deals. It’s estimated that US consumers spent $7.6 billion online on Black Friday, up 22% versus last year. No surprise though, Amazon may have been the ultimate winner. It’s expected that 42% of online sales during the holiday weekend were on Amazon.

That said, the role of the store is not dying; but they’re for more than just shopping. Today’s experience-driven world gives consumers an opportunity to browse, touch, feel and play with products in a way that the digital world doesn’t allow. This holiday shopping weekend saw the lines between the digital and physical world further blur. Consumers who shopped both in-store and online spent an average of 25% more than those who only shopped via one channel.

Free Shipping and In-Store Pickup Are Increasingly Important to Shoppers

Convenience is one of the most important factors for shoppers today. Free shipping was the biggest reason for shoppers to make a purchase they were otherwise hesitant about, cited by 49% of those surveyed, up from 42% last year. The ability to buy online and pick up in-store also grew in popularity this year; BOPIS services saw 43% growth YoY. It’s estimated that one out of every five online purchases will be picked up in store this holiday season.

The majority of consumers shopped online this Thanksgiving weekend; 42% shopped exclusively online and 22% shopped both online and in-store. But mobile was the true star of the show. 73% of all digital traffic came from a mobile device, with mobile accounting for 56% of digital orders. Social feeds acted as a huge inspiration source for digital shoppers; 8% of all mobile traffic came from a social channel and just over 4% of mobile orders came from a social referral.

It’s Still All About The Deals

While a lot about holiday shopping has changed over the years, one thing has remained constant. US shoppers love deals. 36% of shoppers cited limited-time sales or promotions as the reason for buying something they were hesitant about. Cyber Monday was the best day to score deals. Discounts averaged 31% vs Black Friday’s ‘measly’ 28%. These better deals may have contributed to Cyber Monday’s success. It’s estimated that Cyber Monday was the biggest holiday shopping day of all time in the US; consumers spent $9.4 billion, beating last year’s record of $7.9 billion.

This year’s Black Friday results providea great example of how consumers’ shopping habits are evolving and how stores are trying to keep up. As the lines between the digital world and the physical world continue to blur, retailers may need to re-evaluate how they define and measure success, their brand experiences and how they play into their consumer’s journey. 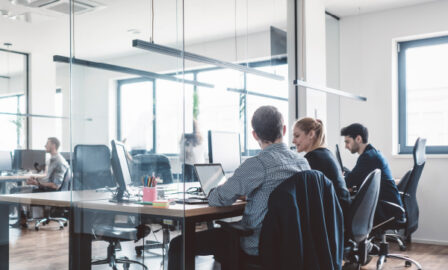 If there has been one common strategic goal across CPG companies and retail companies in the last several years, it’s ... 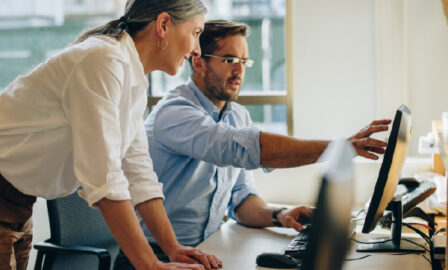 What to Look for in an Analytics-as-a-Service Provider

An analytics-as-a-service provider is increasingly becoming a mission-critical partnership for businesses in the life sciences, consumer products, and retail industries. ... 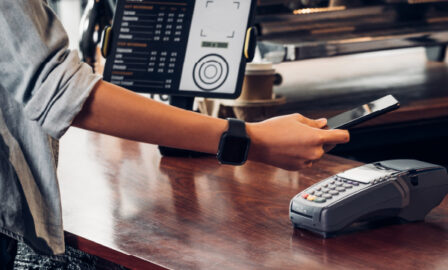 Retail loyalty programs have continued to evolve. From big box to drug, retailers tend to maintain the same general “member-only ...